A man finally bent to pop the question to his girlfriend of five years inside a shopping mall and the moment was captured on camera. 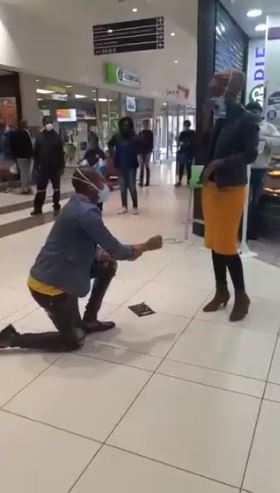 The South African, identified as Kabelo Morake, decided to surprise his partner at the Waterfall Mall in Rustenburg, North West by bending the knee to ask her to marry him.

“I have been with the vibrant beautiful young lady for five years. We shared love kindness and respect to each other so I decided to take her out to express my kindness to her.” 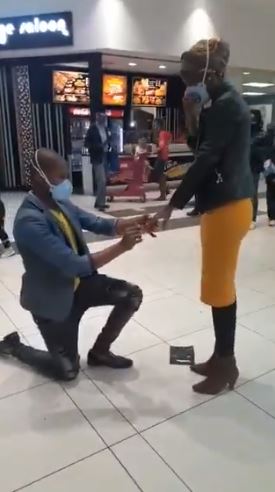 Morake revealed that himself and his beautiful partner met at a Balue build warehouse when he stood up for her.

“She was claiming and I was inquiring. Her sales person was talking her up and down till I interfered. I claimed to be her boyfriend and I successfully solved her matter in sophisticated manner.”

The duo started dating and Morake professed his ample love and respect for his fiancée. He went on to reveal how she has had it tough in life and has also had to endure a toxic relationship and the thought for years that she would not be able to have children.

“I came in her life and maintained her health till God blessed us with two loving kids. She played a big role on my mother’s illness until she became her self again. I am very proud to have her in my life.”

Morake said the key to a successful relationship is love, respect and to appreciate each other.